There is tremendous diversity within the city, but more often than not, those diverse peoples don’t mix.  As Mary Tyler Dad and I walked into the United Center last Wednesday night, one of the things we were both struck by was how amazingly, wonderfully diverse the Prince audience was. 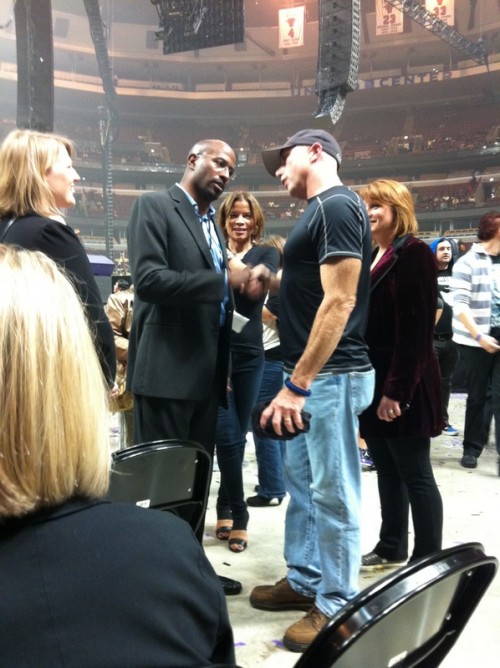 Gay, straight, young, old, rich, not so rich, black, white, and everything in between.  There were wealthy North Shore power couples sitting next to South Side teens.  There were Harley Davidson tees and pony tails next to Sean Jean jackets.  There were hookers (at least they sure looked like hookers) next to old ladies in their Sunday finest.  It was beautiful, people, beautiful.

The other thing that struck us was that people dressed for this.  It was an event and people paid attention to what they were wearing.  We don’t do that enough.  Men and women were turned out.  Turned out — black velvet, purple stockings, brocade shoes, fedoras, heels, lace, spandex, animal prints, and pearls.  It was a thing of beauty, like Sunday church, but on a random Wednesday night. 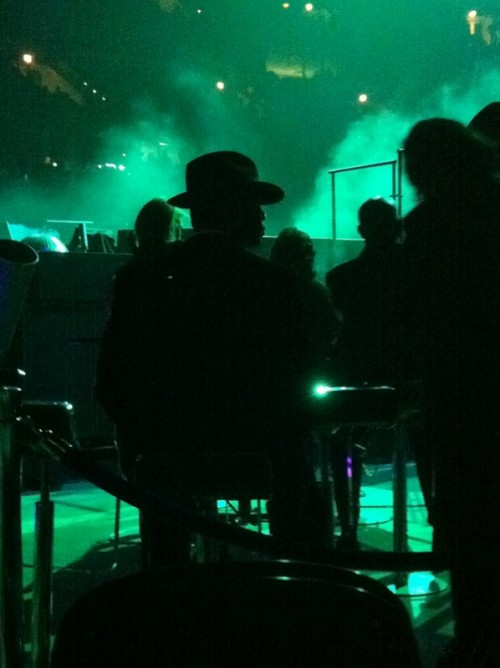 I’ve been a fan of Prince for many, many years.  1999 was released shortly after my 13th birthday, Purple Rain released when I was 15.  The music you listen to as a teen, when angst runs high and identities change like underwear, is the music that sticks with you.  At 42, I still believe Purple Rain is some of the best music ever made and sounds as relevant to me today as it did to my 15 year old self.

I once heard that the true definition of a Prince fan is someone who knows where they were the first time they heard “When Doves Cry.”  Check and check.  Me?  I was sitting in my Dad’s used Cadillac, driving around Minneapolis (Prince’s home town), visiting my oldest sister.  Some radio station was playing an early copy. I was mesmerized.  Transfixed.  We had stopped to park and I begged my Dad to let it play out.  He was not one to indulge his kids’ requests, but he did.  Maybe the old goat was a bit transfixed himself.

That power to transfix is why Prince draws such an all encompassing crowd.  We all want to be transfixed, don’t we?  His music is full of life and joy and grit.  And, let’s be real, sex.  Life is dirty and so is Prince’s music.

His show was amazing.  Just as I had hoped it would be.

I had never seen Prince live.  I would see him on TV and be amazed.  The guy is so damn mesmerizing.  Do you remember the Superbowl halftime show he did in 2007?  Hands down, best thing about football that night.  Anyways.  I had never seen the man and wanted to, badly.  He did not disappoint.  He came out in yellow yoga pants.  Yellow yoga pants, folks.  Think about that.  Who on earth looks good in yellow yoga pants?  I’ll tell you who — Prince does.  Damn, that man is sexy.

The show was a lot like Prince himself — short and full of awesome.  It clocked in at 90 minutes, minus encores.  Too short, but every moment of it was on the money.  In the end, 90 minutes of perfection, 90 minutes of forgetting your sorrows, 90 minutes of dancing with my man and 23,000 other Chicagoans.  It was all good.  So very good.

The encores were also good.  The concert ended with the most democratic of dance parties to some of Prince’s protege’s hits from the 80s — Morris Day and the Time and Sheila E.  I wrote in Donna’s Cancer Story, “You have not fully lived until you have danced with young and old alike.”  There on Prince’s stage were folks as old as 70 and as young as 5 or 6 singing and dancing and laughing and so damn full of life.

It was a privilege to be there.  Thank you, Prince.  You sexy motherfucker.