This is the eighth of thirty-one installments of Donna’s Cancer Story, which will appear daily in serial format through the month of September to recognize Childhood Cancer Awareness Month.  Each post will cover one month of Donna’s thirty-one months of treatment.

Autumn is the harvest season, and it’s no different when you live in Cancerville.  The docs had recommended a stem cell harvest for Donna to extract then freeze her healthy stem cells to be used for a transplant or “insurance,” whatever that meant.  I shudder when I look back at our journal and realize just how naive we were, how little we knew.  Thank goodness for that.  I always say, ‘enjoy your naivete, cause when it’s gone, it’s gone.’  Like your virginity or a plate of fried chicken on the 4th of July.

Looking at these photographs of Donna is very hard for me.  My first thought upon seeing them was, “Oh my God, my daughter has cancer.”  Mind you, this was eight months into diagnosis.  Despite hair loss and vomiting and sunken eyes, much of the time Donna was able to raise our spirits and awareness to a place beyond cancer.  Seeing these photos there was no denying that Donna was in great peril and so, so vulnerable.  The opposite of a vampire, Cancer Donna was only visible in print.  In person, Donna was just Donna, the girl we loved.

Stem cell harvest is an arduous process that involved the insertion of a central line in Donna’s jugular vein placed under anesthetia.  Donna’s blood was removed, the desired stem cells extracted from her blood, then the blood returned to her body.  The machine that the blood is filtered through is called an apheresis machine and it looks like a retro computer from the 1960s, with lots of knobs, dials, and lights.  A threshold number of extracted stem cells are required for it to be considered successful and Donna’s weary body was tired; the chemo had killed healthy cells off just as it had the cancer cells.  As a result, Donna had five eight hour days on this Godforsaken contraption, two last month and three this month.

At the end of the fifth day, we were approached by the stem cell team who wanted to talk and complete paperwork.  What the what?  As far as we knew, our oncologist was leaning towards a watch and wait approach.  Proton beam radiation was still on the table.  And yet here were a team of folks telling us otherwise, that Donna would require a tandem stem cell transplant with a 5-15% mortality rate.  This was a team of folks we had just met moments earlier, a team of folks who knew more about the plan for our daughter’s care than we did.  I was angry.  That night I wrote:

“If a transplant/rescue is what is decided is best for Donna, we will do that.  We will carry her through, just as she will carry us through.  All we ask is to be part of the decision process — not the after thought the stem cell team kind of insists on making us.  The stem cell doc tried to reassure us today by calling us the “quarterback” of the team.  If he knew me, he would know that you don’t use a freaking sports analogy when talking about Donna’s health, and that if we were the quarterback, we would call an audible and go home and forget any of this ever happened.”

Several days later, we met with our oncologist who confirmed our fears.  Yes, the team had shifted gears and was now recommending a tandem stem cell transplant.  But, honestly, what did we think Donna was hooked up to that contraption for?  A transplant would involve hard core chemo.  The stem cells are harvested in a time of health to be reinjected or “transplanted” back into the body to “rescue” the immune system, and, in effect, the patient, from death.  Without healthy stem cells, the strength of the chemo is so toxic and potent that it would kill.  Even with the stem cells, there was the anvil of the 5-15% mortality rate.  And which was it?  One person told us it was nearer to 15 than 10 and another told us, “Nah, it’s more like 5-10%.”  Nah?  Just like that.  Nah?  Yeah, cause that’s how stem cell docs roll.

In the photos, you see how uncomfortable Donna was.  She favored or protected the right side of her neck the entire time that tube was in.  And this was a TUBE — no cutesy “tubie” was this monster.  I had to leave the room to breathe when the nurse pulled it out at the end of the process.  When I saw it lying there on the hospital bed I gasped a little.  My darling, my Donna.  What were we doing to her?  And at the end of three days of harvest, Donna’s reward was another dose of VAdriaC. 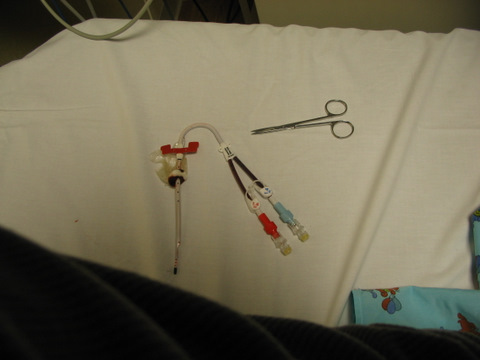 After a visit to the oncology playroom during this hospital stay, I wrote:

“This admission was a lesson on the continuum of cancer.  For the first time in memory, Donna was the sickest kid in the room.  It’s hard to be the parent of a child with cancer, but it’s harder to be the parent of the sickest kid in the room.  It feels so defeating and hope dashing.  It brings out the worst in me.  You actually start to envy kids with different cancers.  That’s just wrong.”

You know your kid is sick when you’re jealous of another kid’s cancer.

But like the stock market I referenced a few months ago, there are ups and downs to cancer.  The VAdriaC was simply less potent and Donna recovered more quickly from it’s grasp.  The color on her cheeks reappeared this month for the first time since June.  That’s five months ago for those keeping score at home.  Halloween (Little Red Riding Hood) and Thanksgiving (where you see Donna below) were spent in health and Donna enjoyed them both.  Donna’s chemo cycles were over.  She had not only survived them, but thrived.  Though there were sixteen hospitalizations since we moved to Cancerville, there wasn’t a single infection under chemo and Donna recovered amazingly well, the docs assured us.  Take that, bastard cancer.  Donna was a rock star.