This is the twenty-second of thirty-one installments of Donna’s Cancer Story, which will appear daily in serial format through the month of September to recognize Childhood Cancer Awareness Month.  Each post will cover one month of Donna’s thirty-one months of treatment.

This next month was a rough one.  When it rains, it pours and these days, it was like a monsoon.  On the first day of this month, scans showed continued growth of Donna’s tumor, albeit slowed.  With our due date less than two weeks away, though, the docs decided to stay the course for one more month — two more rounds of the current regimen.  Not good, but at least we would have some space and time to welcome the new baby with a certain level of predictability.

Ha!  In Cancerville, there is no such thing.  The only thing you can count on in Cancerville is pain and heartbreak.  About twelve hours after leaving the hospital, Donna developed a fever and we were told to bring her in to the ER.  This was Christmas Eve, it was three in the morning, and there was a blizzard happening.  We got stuck in the alley twice just trying to get the car out.  Sigh.  Donna, though, was making the best of it.  Poor Mary Tyler Dad was out trying to push the car, I was inches from delivery, and trying to steer the car with my big belly in the way, and Donna?  Donna was in the back seat singing about the weather.  Oh, that girl knew how to have a good time.

We got out, into the ER, which was blessedly empty.  Have I ever mentioned the rock star treatment kids with cancer get in the ER at Children’s?  The oncology resident always informs the ER to expect you.  When you arrive, even if the place is packed, which it usually is, with snotty, sad, bloody, hacking, miserable kids and families, you go to triage.  When you get your turn in triage, they know who you are and are waiting for you.  The routine of temp, height, weight, etc. is done and then you are ushered into a private room.  Don’t get me wrong, you wait like any other family, but because of your kid’s immune issues, you get to wait in the comfort of privacy, which is a huge blessing in such a stressful sitution.

Okay, the ER docs checked Donna out and could find nothing wrong with her.  As was often the case, her fever dissipated with arrival at the ER and her mood was good, though tired.  Four hours later we were sent to clinic and day hospital to receive the already scheduled chemo.  We went home, Donna played and ate, and went to bed early.

Twelve hours later, on Christmas Day, Donna awoke, sad and not feeling well.  No interest in Santa or gifts or anything that didn’t involve resting in her Daddy’s arms.  Poor girl just had no ambition, as Da would say.  We cancelled our family holiday and all stayed in pamajas for the day.  Auntie and Uncle were visiting and we made our own modified holiday cheer.  Until the vomiting started.  Just before her afternoon nap, Donna vomited.  When she woke, she vomited again.  For a few hours, it was every hour on the hour.  There was no fever and it was Christmas Day and the docs told us without fever, just keep her hydrated and wait and see.  That should have been our cue.  “Wait and see” never bode well for Miss Donna.

The vomiting stopped about 1 am and Donna slept through the night.  When she awoke on the 26th, it was with a fever and gray pallor and sunken eyes that I did not recognize.  It is impossible to describe what you feel as a parent when you are staring at your child and you do not recognize them.  We booked it to the ER.  There was no singing this time.

Donna was quickly diagnosed with a “critically dangerous” low level of carbon dioxide in her blood.  The fever and vomiting had created the perfect storm of chemistries in her body over a matter of hours.  She moved into a deep sleep in the ER and could not be roused.  Doctors were buzzing and before we knew it, Donna was transferred to the pediatric ICU.  What the what?

Gratefully, with constant hydration, our girl came back to us in a matter of hours, though a much less animated version of herself.  The docs also found RSV, a virus that can be extremely dangerous for immuno suppressed children and infants.  We were two for two in those categories and alarmed.  I implored the child inside of me to stay put.  Donna was transferred out of the PICU and onto oncology the next day and the day after that we were discharged.

The girl we brought home, though, was not the girl we hoped to bring home.  Donna was listless with little appetite.  She was back on overnight fluids, which always managed to have the reverse effect of taking away her thirst.  She laid on the sofa and watched tee vee and napped.  That was just about our speed, too, as we had both developed colds ourselves.  Poor Auntie and Uncle got lots more than they bargained for in this visit.  Merry Freaking Christmas!

Mary Tyler Dad wrote about this in our journal:

“I’m realizing how thin Donna’s reserves actually are.  One good cold put her in the ER twice, PICU, and on the couch watching TV at home for another week.  Donna is a happy, growing girl, but one bad bump and we’re in the hospital again.  I think I spend as much time as I can in denial.  Things like this remind me of how lucky we’ve been, to have stayed on the tightrope like we have.  You get so comfortable walking around, you forget you’re on a tightrope altogether.  And then, whoomp, you’re in the net and you remember . . . right, right.  We’re on a tightrope.”

A few days later, I went to the hospital myself.  You can tell it’s been a rough week when going into labor feels like a guilty break.  Sigh.  With Donna better, but still not nearly herself, both her parents left her to deliver the baby.  More guilt.  Intense guilt.

While I had informed my ob about Donna’s RSV, he clearly did not see the same significance with it as the labor and delivery staff.  When I casually mentioned Donna at home with the RSV cold to my nurse, everything stopped cold.  We immediately went on lockdown and I was treated kind of like a suspect, complete with interrogation.  Who?  What?  When?  Where?  Why?  They did not care that I had discussed it with my ob.  Plans were made to move me to an isolation delivery room where all docs and nurses would have to scrub and gown each and every time they saw me.  This was a pain, I know from the stem cell transplant, and it did not endear me to anyone.

Before we moved, I was given my epidural.  I knew enough of pain and had no desire to feel the pain (or wonder, for those who dig natural childbirth) of delivery.  Mary Tyler Dad had left the room at the doc’s request for the needle stick and within minutes I started to feel funny, woozy.  I passed out.  A few minutes later I came to with literally dozens of doctors and nurses surrounding me.  No Mary Tyler Dad.  The doc told me that my and the baby’s vitals were dropping and I would require a C-section.  I cried and wailed and started screaming, “This baby has to be okay!  My daughter has cancer!”  Oy.  I was strapped to the gurney watching the flourescent lights above spin by as the team ran me to the OR.

I still don’t know what happened, but my vitals improved.  The baby’s vitals improved.  The doc cautioned everyone to take a breathe and wait, to give my body a few minutes to see if it would recover on it’s own.  It did, and about eight hours later Mary Tyler Son was born.  It was not the blissful delivery I had with Donna.  This one was a bit more work.  When the baby came out, Mary Tyler Dad said, “It’s a boy!”  My first thought upon seeing my baby was, “Damn, a penis.”  Isn’t that awful?  I had so been hoping for another girl.

As is often the case, I was wrong.  I held Mary Tyler Son for the first time and fell in love with him.  He was a natural latcher and within moments of his birth I was nursing him.  Wow.  My baby, Donna’s brother, my boy.

With the RSV, there were lots of precautions to take.  Donna could not come to the hospital, nor could they be in the same room when we returned home.  Donna would not hold her brother for thirteen days.  We had zoning in the house:  Donna downstairs and Mary Tyler Son upstairs.  We needed to wear masks and gowns when with the boy and I felt deep sorrow and anguish about that.  I know how important faces are to newborns, specifically their mother’s face, and mine was covered.  I hated cancer in those days.  I was angry.  Cancer had robbed us one of the most precious times a family will ever enjoy.  Bastard cancer. 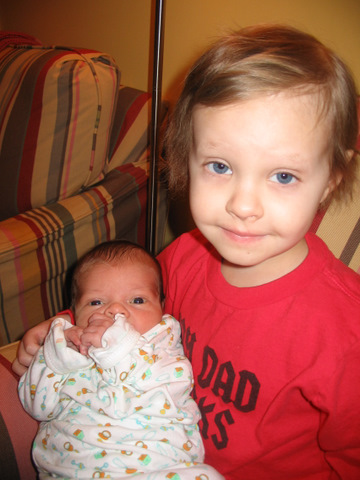