In its place will be the bright and shiny, state-of-the-art Ann & Robert Lurie Children’s Hospital of Chicago.  This is not a bad thing, and in fact, is a great thing that will benefit the children of Chicago and Illinois in countless ways.  And yet, I can’t deny the sadness this brings me.  With ‘Donna’s hospital’ closing, we lose yet another link to our girl.  Indulge me as I say goodbye before I say hello.

Diagnosed at 20 months old and in treatment for the remaining 31 months of her life, Children’s Memorial became a second home to Donna.  Within those walls we heard the catastrophic words, “there is a mass in your daughter’s head.”  Within those walls we cheered as our girl learned to walk a second and third time.  Within those walls we learned how to choose hope, in desperate and dire times.  Within those walls Donna laughed and played and cried and vomited and awoke from sedation more times than I can count, always asking for pancakes and milk.  She slept and woke, ate and drank, struggled and thrived.  She would shyly smile at her doctors and nurses, she would slowly charm her art and music therapists, she would walk lap after lap around 4 West/Oncology, pushing her shopping cart, Mary Tyler Dad and I pushing her IV pole, trying to keep up.

Blessedly, Donna almost always enjoyed her time at Children’s Memorial.  It could be three in the morning, a neutrapenic fever raging inside her, and we would pull under the canopy off of Fullerton Avenue, and Donna would greet the helping hand logo with her own helping hand, stretched high in salute.  What a dear she was.

She made the rounds, you see, spending time on the neurosurgery floor after each of four tumor resections (3W fishbowl, anyone?), inpatient chemo rounds and stem cell transplant on 4,  clinic and Day Hospital for outpatient chemo, ER visits (blessedly always expedited for cancer kids) on 1, procedure suite and recovery and MRI scans on 2, the first alarmingly terrifying days in the PICU after diagnosis, and day after day at the aphaeresis unit, trying to extract the elusive healthy stem cells untouched by her chemo.  Yes, we all made the rounds.

In trying to understand why change — positive change — would make me so sad, I think it is this:  Donna was very alive at Children’s Memorial.  The closing of this structure is another loss, another connection to Donna gone, poof, gone.  Ultimately, of course, the structure is bricks and mortar, I know this, I understand this, but these particular bricks and this particular mortar hold a lifetime of memories for me.  My daughter’s lifetime, to be specific.

And Donna, unfortunately, is not unique.  She is one of not hundreds, but thousands of children that have lived and died within the walls of Children’s Memorial Hospital.  The current building was built in 1960.  It is decidedly past its prime, but at some point, it, too, was state-of-the-art.  And almost certainly, there was a grieving mom somewhere mourning the loss of the buildings that had to be razed for pediatric progress to occur in the late 1950s.  That is life and that is change and that is progress.  Oh, but all that sucks sometimes, doesn’t it?

For me, the land at the crossroads of Fullerton and Lincoln Avenues is sacred ground.  Countless children over one hundred years have died in that space.  Just as sacred are the thousands upon thousands of children whose lives were saved in that space, which is legally nothing more than an address.  The children who died there are not buried there.  There are no laws or regulations limiting the development that will follow, such as would surely be the case for a cemetery.  Calling me a bleeding heart would be accurate.  My heart hurts when I think about that ground, the lives lost and saved, the tears spilled, both of joy and of sorrow.

In the midst of all the celebration, justified as it is, I want to take a moment and think of those children that were treated at Children’s Memorial Hospital over the past century.  I want to remember the parents that stood helplessly by as their child was passed to the hands of the doctors and nurses that could or could not save them.  I want to honor the lives that were lost and the lives that were saved within those walls and on that ground.  For just a moment, I want progress and change to stop, so that we can pay homage to what came before.

So, yes, bricks and mortar, and memories that do not exist within the walls, but within the hearts and minds of doctors and nurses and janitors and moms and dads and security guards and surgeons and clerks and brothers and sisters and patients, so many patients, and all those who walked the hard tiled floors, breathing, hoping, bargaining, praying, pleading, wailing, cheering, despairing.

Before we celebrate the inevitable progress and successes and losses that will come to Lurie Children’s Hospital of Chicago, let us remember and honor what was.  Bricks and mortar, but so much more.  So very much more to so many.  Sacred ground, at the intersection of Lincoln and Fullerton, amidst the bars and the condos and the college kids. 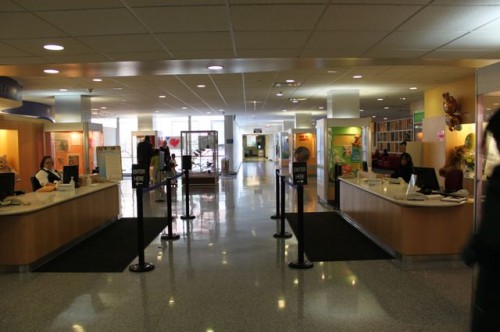 All photos courtesy of Lisa Watters.

You can hang with me on Facebook, or you can learn about my charity, Donna’s Good Things, or get a daily dose of Good News.  Mary Tyler Mom is one stop shopping.