Today is Election Day.  I am a democracy dork, so that makes it pretty special in my home.  As long as I can remember, I have been interested in the larger world and how politics impacts our little worlds.  I have fond memories of hanging on to my parents thighs as they waited in long, long lines to vote, my neck straining from looking up, trying to get a glimpse of all the adults above me, imagining all the important things they were doing.  I distinctly remember the metallic noise of the curtain closing behind my Mom and I as she entered her votes.  The curtains were blue and scratchy and the booth was small.  I liked being inside, as the mysteries of voting were a lot less mysterious in there.

We had spirited conversations at family dinners about what was happening in Washington, D.C. and Chicago and Springfield — the three capitals of politics that most impacted our day-to-day life.  As a young girl, I got caught in a melee when a classmate insisted she was allowed to actually vote with her parents.  I would have none of that fairy tale.  My little girl self knew the score.  No vote until you are 18.  Period.

Today, we woke about 6 AM.  Mary Tyler Son needed to be leaving for school by 8, so we opted to vote first and breakfast later.  All three of us walked to our polling place, a local synagogue.  I carried graham crackers and raisins for the boy to tide him over.  I was a little sad to see no line outside the door, as my Facebook friends in a few places had already described.  This was Mary Tyler Son’s first presidential election.  He knows who Barack Obama is and has identified Mitt Romney as Obama’s bodyguard.  Regardless of their position in his eyes, I love that my three year old knows both candidates’ names.

The last time I voted in a presidential election, Mary Tyler Son had yet to be born.  That bun was still in the oven.  I was nursing him by Inauguration Day, Donna still at my side.  A lot can change in an election cycle.  What hasn’t changed are the butterflies I feel, waiting for results, an all too familiar combination of hope and fear.

I am naive, you see, believing that yes, my vote does in fact matter, despite the fact that neither candidate has courted Illinois and that I live in a district where an incumbent runs unopposed in many of the more local races.  I don’t care.  The most important vote I cast today was for Mary Tyler Son’s future, that he too will grow up to honor and respect and feel grateful for the democracy he was blessed to have been born into.

Mad props to my parents who taught me well.  I am so grateful that they allowed their four year old daughter, little ‘ole me, to watch as Richard Nixon resigned.  I am so grateful that they kept me home from school on a warm day to go to the local high school to see President Carter in a town hall meeting.  Seeing Marine One land in the field where I had played a thousand afternoons was thrilling.  The Secret Service inspecting my school bag made me feel dangerous and important all at the same time.  I am so grateful to my parents who respected my 10 year old self enough to talk about their vote for John Anderson, the Independent candidate, in 1980. 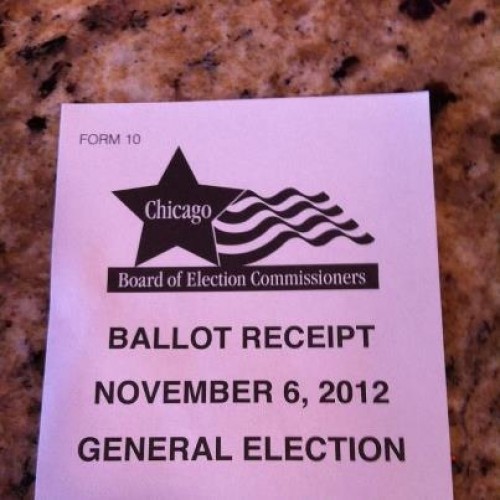 4 Replies to “A Good Day in America”