When Mary Tyler Son turned four something else turned, too, and not for the best.  The sweetest, gentlest, dinosaur loving, Greek myth reading, little boy became . . . how do I put this gently . . . aggressive.  AGGRESSIVE.  Hitting, kicking, in your face aggressive.  Unpleasantly so, too.  I checked the warranty, but it had expired.  Dammit.  We were gonna have to figure this one out on our own.

We tried time outs.  He would extend them to six minutes, just to show us that they didn’t matter.  We tried removing favored toys.  He found other favored toys.  We tried eliminating screen time.  Well, I gotta say, that one sucked more for me than for Mary Tyler Son.  Why was I being punished for his aggressive behavior?   Harumph.

And let me add at this point in time, any of you who feel the need to question my parenting tactics, have at it.  Judge away, Judgey McJudgersons.  This gig is tough and I will be the first to admit that I don’t have all the answers.  Suggest away, too, as maybe you found the elusive method I have been looking for.  What you can’t do is say what a terrible, horrible no good very bad son my boy is.  Or, you know, this:

“my daughter would never hit or kick. she never has been taught how to hurt someone. grateful for having given birth to a little girl with a soul thats peaceful and not full of anger and violence.”

So, just so we’re on the same page, sharing your own hard earned experience with managing hitting and kicking and all around aggressive behavior is most welcome.  Condemning my son’s soul ain’t cool.

Oh, yeah — the No Hit, No Kick Club.  Mary Tyler Son’s aggressive behavior wasn’t escalating, but it wasn’t getting any better either.  I brought it up at the spring parent-teacher conference and his teacher assured us he had no aggressive behavior in the classroom.  Whew.  She also told us about the testosterone surge that occurs in four year old boys.  What’s that you say?

I came home and Googled, “testosterone surge in four year old boys.”  Most of the scientific evidence comes out of New Zealand (I blame the Kiwi love of hokey pokey), but there are tons and tons and tons of bulletin posts from frustrated and worried parents all describing exactly what I was seeing in my very own four year old little boy.  Sweet boys who are seemingly transformed overnight into loud, hitting, kicking, grumpy machines.  Oddly, not a single parent worried over the state of their son’s soul.

I was raised in an authoritarian Irish Catholic home.  Never in a hundred years would I have considered hitting or kicking my parents.  Not a freaking chance.  I knew, intuitively, that adults were off limits.  We sat quietly in church, too.  It was a non-issue.  If my Dad were to give advice, he would say, “He needs a little pat on the popo.”  Well, I love my Dad fiercely, but we simply agree to disagree on this one.  Popos are off limits.

I do, though, see red when my boy hits, kicks, or defies us so blatantly.  In my head I think, “That’s just not done.”  Somehow, what is crystal clear in my head is not so clear to Mary Tyler Son.  So, yeah, the hits and kicks and grumpy behavior continued despite our consistent parenting.

Mary Tyler Son’s teacher suggested reward over punishment.  What’s this you say?  At first, that sounded like crazy talk to my Irish Catholic authoritarian tendencies.  Reward this son of mine for not hitting or kicking me?  That seemed cray to the zee.

But one day, after another session of the boy’s hitting and kicking and me shaming, “How on earth could you hit your mother?  Your Mother?!” I knew I needed a new tactic.  In that moment was born the No Hit, No Kick Club.

It was decided that for every day without hits or kicks, Mary Tyler Son would earn a sticker.  With seven consecutive stickers, a new toy would be rewarded.  I opted for a stash of $4-6 Playmobile figures, none of which he had seen before.  I showed one to him as incentive and left it front and center on the kitchen counter.  He liked it.  He smiled.  He was excited.  Let’s do this.

I made a chart and posted a photo of it on Facebook, cause everything of worth happens on Facebook, right?  Not one, but two moms I really admire and respect told me flat out that seven days was too many.  One just happened to be my mother-in-law, who also happens to be a child psychologist.  When a child psychologist/mother-in-law suggests something, it’s prudent to listen.  And I did, but I had also already established the rules with the boy, so it felt not so cool to adjust coming out of the gate.

First day, success, sticker!  Second day, hitting, no sticker.  Third day, success, sticker!  Fourth day, hitting, no sticker.  NEW RULE!  Three days with consecutive stickers would earn a toy.  Mary Tyler Son liked the new rule, and sure enough, he racked up three stickers in the next three days!  Toy!  He liked it!  He racked up another three days and got another toy!  Wow.  I am a genius.  This No Hit, No Kick Club rules! 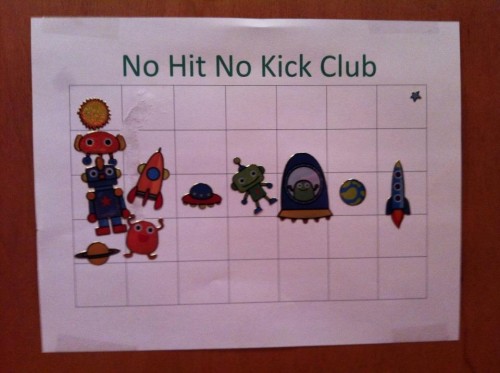 BAM.  With seven stickers in a row, and me commenting on that and suggesting we might extend the reward to five days, the hitting came back.  Mary Tyler Son was devastated.  He hit the next day, too, early in the morning, which seemed to give him free license to spend the day hitting and kicking, since it was already a no sticker day.  Boo.

We’re back on track now and today looks like it will make three days in a row with stickers.  I’m not holding my breath on that one, and I sure as hell am not telling him about it before bed time.  The jury is still out on the No Hit, No Kick Club, but we’re gonna keep at it for a while.

No doubt, though, I’ve doomed it after breaking the first rule of the No Hit, No Kick Club.  Shhhhh.  Don’t tell Mary Tyler Son.