I pretty much stayed out of the fray with the birth of the most recent royal.  I’m not a royalist or an Anglophile and after the death of Diana, well, my sole icon obsession is relegated to Irish Catholic political dynasties.  Can you say Kennedy or Daley?  I can, and often do.

That said, my heart kind of melted when I saw the photos popping up on my Facebook feed.  The sheer joy and utter amazement on Price William’s face as he held his newborn son.  Well, yeah, that got to me. ‘Well done,’ I thought, and wished him the best.  I mean, seriously, how could you not feel a little tug?  There is such joy and potential in a newborn.  And there was Diana’s first grandchild all perfect and untouched.

Then I saw it.  Within hours of the happiest of couples leaving the Lindo Wing with their newly swaddled bundle of joy, who also just happens to be the future Kind of England (how’s that for silver spoon?), a blog post headline remarking on Princess Kate “still” having a pregnant looking belly hit my screen. 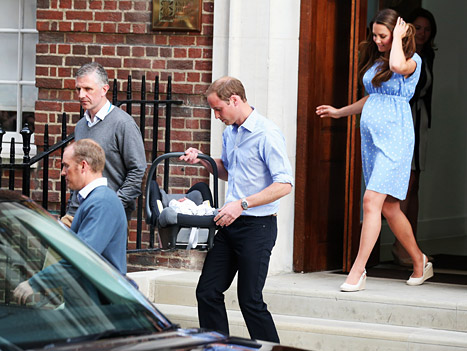 While I know this post was not meant as condemnation or intended as a slam (which is why I am not linking to it), the title alone feeds into the heinous expectations women place on themselves due to our obsession with celebrity culture and the messages the media regularly and loudly send us. And let’s not kid ourselves, ladies, as there is certainly a male contingent who hold women to these expectations as well.  Have any of you seen the husbands in the Real Housewives franchise? These dudes exist and sometimes live right next door to us.  Shivers.

A friend remarked on the same thing in a Facebook status update this morning.  Why are we needing to defend the extra few inches around Princess Kate’s middle just HOURS after she gave birth?  Here this gal just did one of the most miraculous things a body will ever do, and the chatter starts, even if it is meant to be humorous and “tongue in cheek,” as another friend suggested.

I promise you I am not humorless, but I also promise you that when we start to refer to women as “still” having a pregnant looking stomach 24 hours after giving birth, even in humor, we are treading into some pretty icky and tricky waters.  These messages stick to us as women, consciously and subconsciously and unconsciously, just as much as the peanut butter from our toddler’s fingers.  Whether we want to or not, we are receiving the message that perfection is what is demanded.  Always and in all ways.

Giving birth is not enough.   No, mam.  We need to give birth, then walk out of the hospital in our skinny jeans.  And if we don’t?  Well, what the hell is wrong with you?  Are you lazy?  Genetically doomed?  Not up to Hollywood standards?  The answers are simple:  NO, NO, and YES.  Cause most of us are not Hollywood starlets, and that’s okay.

We have the capacity to reject these messages, but only if we are aware of them.  Know what you are looking at, take the smallest of steps back and see the messages, both written and unwritten.  Step away from the US Magazine trash and Perez Hilton bash and know that they are powerful.  Very powerful. But you are powerful, too.

And if you’ve just given birth and have more of a triple layer chocolate cake top rather than a muffin top?  Well done, mama, well done.  You are amazing.

But don’t just believe me, a publicly established feminist blogger.  Take it from my new BFF Ralph, who left this message on the Facebook thread I referred to above:

I think women can be almost as hard on themselves as the media. As a man, I want to state out loud that a little shape is a wonderful thing  no matter the shape. Most of my male friends would say the same. The ones that don’t aren’t worth bothering with usually, anyway. But you guys probably know this by now.

Do you?  Do you know this by now?  I think many of us don’t, on a very real and potentially damaging level.  I speak from experience, cause I am the first to condemn myself for the extra weight I carry.  Sigh.  But I’ve done this since the 8th grade when at probably no more than 100 pounds, I was embarrassed to walk around the local pool without a towel around my middle. I just shake my head now.

Do your thing, Princess Kate.  Mother that baby, wear your polka dot dress with the elastic waist that highlights the abdomen that just birthed the future Kind of England.  Work it, girl.  Don’t listen to the chatter.  And for the rest of us?  Know that you are better than okay.  Know that you have the capacity to decipher messages, overt and covert, that try to tell us otherwise.  You work it, too.

You like this?  You want more of this?  Then hit me up for a subscription.  Here’s how: