September is Childhood Cancer Awareness Month. Each day I will feature a different guest blogger who will generously share their personal experience with childhood cancer.  Stories are always more potent than statistics.  The hope is that by learning about children with cancer, readers will be more invested in turning their awareness into action.  Read more about this series and childhood cancer HERE.

On July 4, 2011, we received the awful news no parent wants to hear, “Your son has leukemia.”  And not just leukemia, but mixed type leukemia, which is a combination of ALL and AML.  The next day we were meeting our new “team” at Comer Children’s Hospital and learning the new cancer language.  As we spent the next few months dealing with chemo, spinal taps, ports,  fevers,  and anesthesia (Nicholas would always try to bounce around on the table- even though he was out like a light!), our goal was to get rid of the cancer. 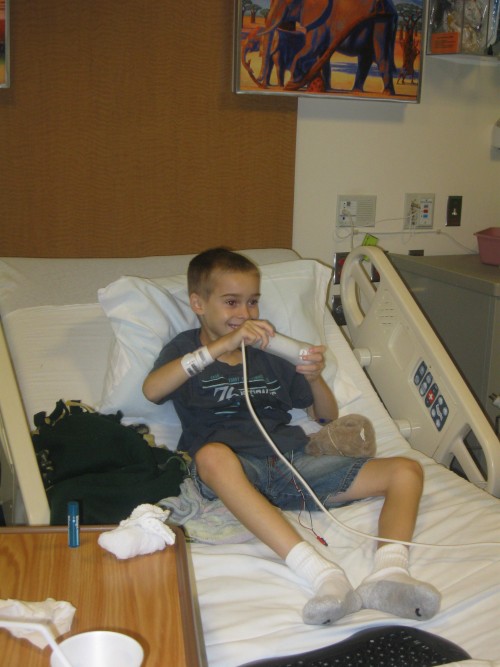 In August, 2011, school starts!  We made it to third grade and he had the sweetest teacher in the world.  She would do just about anything for him and us.  Nicholas still didn’t like going to school, but loved his friends and showing off his new bald head!

In November, 2011, I heard the doctor say the word ‘remission’ and I looked at my husband and thought “YES, we did it!  We are in the clear!”  We still have years to go, but no more cancer cells in that little body anymore, YAY!”   We had a quiet Thanksgiving after Nicholas had some words with the doctor to let us go home on Wednesday night.

A week later the fever came…..

What we thought was a normal neutropenia fever turned into so much more.  We headed down to the hospital for labs and prepared for the two day stay and hoped that all the blood work came back clean.  But our journey to the PICU was just beginning ….

I received a call from my husband on night two that Nicholas was coughing and having trouble breathing.  We weren’t sure what to do and we were having trouble getting a straight answer from the doctors because his labs weren’t showing anything unusual.

Nicholas was transferred down to the PICU that night so they could keep a more watchful eye on him and control his breathing.  During that night he was on many different breathing machines, all of which were very uncomfortable for him.  I rushed my daughter off to school the next morning and sped down to the hospital to check on Nicholas as fast as I could.

I walked off the elevator and onto the 4th floor PICU and was searching for my “Bud!”  I was stopped before I walked into his room and his nurse introduced herself and tried to explain what was going on but I was not prepared in any way for what I was about to see.

Nicholas was attached to a CPAP breathing machine and he seemed to be hallucinating while in and out of sleep.  And these machines were not helping at all, so we were given the news later that afternoon that he would have to be intubated or he might not make it.  All I could think of was, “They are going to put my baby in a coma, on purpose,” and the only thing I could do was stand by and watch.

Nicholas had a very rough first night with the intubation tube.  The docs were in and out of that room all night while I sat and watched and cried from the couch.  I heard from one of the doctors a couple weeks later that she was very surprised he made it through that first night.  This kid was a fighter and we would not give up!

The next couple weeks were a blur.  Nicholas was intubated, but they were trying to decrease some meds to get him to come out of the coma.  Finally, as I was talking to him, I got the hand squeeze that I had been waiting for.  The joy that we felt was short lived.

The next morning, when he should have been moving and waking up more, he was doing even less.  They took him down for an MRI which ended up showing bleeding on the brain.  In order to reduce the bleeding they had to do a surgery which requires your blood counts to be up, but as a cancer patient, his blood counts were down.  The team had to do many infusions very quickly in order to get him to surgery before more damage could be done.

After the surgery, we were thrilled Nicholas made it through, but the scans showed a lot of fluid in the lungs due to the mass quantity of blood they had given to him in a short amount of time.  Now a chest tube had to be put in to release all the fluids that had built up.  We were also dealing with an aspergillous infection and a massive amount of antibiotics.

By now we are in our first month in the PICU.  Our favorite nurses and staff were taking care of Nicholas and sometimes us! They were reducing the sedation drugs and getting ready to work on weaning him off the ventilator, but with every step forward we seemed to take 3 steps back.

The team had tried to wean Nicholas off the vent too fast, which did more damage to his lungs. He was put on a different ventilator, which dod not allow him to be moved, along with more of the sedation.  Back to square one.

The next few weeks were difficult ones, as we had many setbacks.  Finally, in February 2012, we were so happy to see Nicholas open his eyes and spend some time with us.  He was able to be moved and we had the physical therapist coming in and working with him to get those joints moving again!  We knew we were going to have a rough road ahead getting him better and we were exhausted, but ready!

Nicholas was getting feisty again (pinching his nurse as she was trying to give him a bath!), and watching his favorite movie, Cars, over and over, but his stats were not getting any better, and his lungs were not doing their job.  He was not able to get on the lung transplant list due to his leukemia.  We did the best we could to keep him as comfortable as possible and celebrated his ninth  birthday early with our family and friends.  Nicholas even let his sister give him a big hug, although she squeezed him a bit too hard and he mouthed OWWW, but then gave her a smile.

We spent Nicholas’ last few nights talking to him when he couldn’t sleep.  We learned all his favorite things before we had to say goodbye.

On February 28, 2012 Nicholas Robert earned his wings.   I am sure he is always watching over us.

Team Nicholas was formed to honor his memory and keep his giving spirit alive.  We help other families with critically ill children in our community and make monthly donations to the Comer Children’s Hospital Child Life Department.

If you’ve missed any posts in Childhood Cancer Stories:  The September Series, you can find all of them catalogued HERE.

If you don’t want to miss a single child’s story, you can subscribe to my blog.  Please and thank you!