Picture this:  The grandparents are in town, we’ve enjoyed lots of great family time and fall activities with our two boys, and it is suggested that Mary Tyler Dad and I take a few hours for ourselves and go on a date.  No need to twist our arms.  Based on buzz and glowing reviews, we decide to see “Gravity” in 3D on the IMAX screen.  Date nights are few and far between right now, so we were all in. 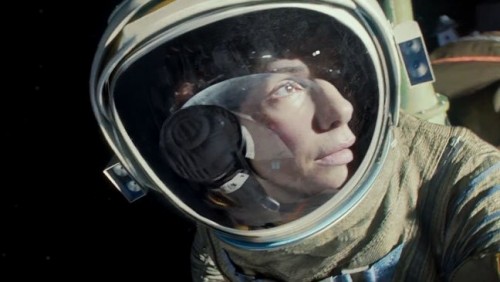 After nachos, a soda so large Leslie Knope would disapprove, and twenty minutes of previews, we prepare to enter space.  We expected a film that looked like the previews, full of terror and thrills and beautiful people in space suits.  All we wanted was a few hours of escapism and the opportunity to be transported.

Yeah, not so much.

Shortly into the movie, it is revealed that Sandra Bullock’s character, Dr. Ryan Stone of Lake Zurich, Illinois (a local, yo), is the grieving mother of a four year old daughter who died in a playground accident.  As Mary Tyler Dad put it so effectively in a Facebook status update,

Just saw GRAVITY. Very, very good, recommend it highly. But. Explain to me how a movie set among astronauts in space has a dead four-year-old daughter in it?

When this particular plot device was revealed, and make no mistake, the presence of a dead child is indeed an often used plot device, Mary Tyler Dad and I looked at each other in the darkness in a moment of solidarity. What can you do?  We knew in that instant that this would be a different type of movie experience than for those sitting around us.

What we didn’t know, what I didn’t know, was how profoundly moved I would be by Gravity, how completely and thoroughly Sandra Bullock’s space crisis is the perfect metaphor for grief, and how absolutely director and writer Alfonso Cuarón captured the pain of child loss and intense grief that parents experience.

Leaving the movie, I was dizzy and exhausted, but I also felt understood, seen, and that I had just witnessed truth.  This is a rare thing in filmmaking.  Days later, I feel grateful for the experience.  I want to sit down across from Cuarón, weep in his presence, and let him know how grateful I am to him for capturing something so profound.

When we got home, both of our little ones were asleep.  I couldn’t wait to tuck myself into bed, in the dark and quiet of our bedroom, and Google reviews for Gravity.  What a colossal missing of the mark did I find.  Rotten Tomatoes gave Gravity 97%, but most every review focused on the visuals, the experiential aspect of the movie.  A few loved it, but dinged it for lacking plot.  Some thought the presence of a dead child was contrived.

One particular review really got to me.  This is an excerpt (italics are mine) from Stephen Carty of Flix Capacitor:

A straightforward tale of survival, the film is decidedly slight when it comes to narrative and character, lacking the kind of underlying layers that might compel you to watch it again. In fact, it could be argued that there’s not much more to the story than Bullock drifting from one space-based predicament to the next. Undoubtedly, each and every predicament is so spectacularly realised that many viewers won’t care. They’ll just enjoy being pulled along for the ride. But on a deeper level there isn’t much to think about, with Cuaron offering little in the way of thematic weight or high-minded ideas. There’s nothing inherently wrong with such an approach, of course, but the end result is never particularly involving in an emotional sense, despite the best efforts of both Sandra Bullock and George Clooney.

Methinks, blessedly, Mr. Carty has no personal experience with the death of a child, cause for me, Gravity was an intense experience both visually and emotionally.

For those of you who have seen Gravity, what most sticks with you?

This, my friends, is grief, in its purest of forms.  The predicament Bullock’s Dr. Stone finds herself in so closely acts as a metaphor for intense grief, that I cannot shake it.  Instead I embrace it, mulling it over, again and again, grateful for the opportunity to watch it, see it, feel it again through the comfort of dark, soda and nachos at my side.  Bullock’s crystalized tears that gently float off the screen were not overkill, they were my tears, the tears of every parent who survives loss.

The grief of child loss is lonely and terrifying and steals the only anchors you think you have.  It unhinges you, flings you into this vast space that few others have seen, let alone walk through.  Child loss is disorienting, isolating, foreign, vast, unending, transformative, impossible.  The parent that survives this grief is not the same parent, not the same person.  You know things about yourself and the world that can never be unknown, ever again.  Your eyes are opened, your heart is exposed, worn outside your body for the rest of your days, your capacities tested in ways you never imagined were possible.  You are different, stronger, knowing, fierce, changed.

If any of you, dear readers, wonder what it is like to lose a child, watch Gravity.  Know that while extreme and visually fantastic as it may be, it fully, completely, and truthfully captures the grief of child loss.  And this is not a plot device, this is not a vaguely sexist tool used to make Bullock more vulnerable, cause I will tell you that there is nothing stronger than a mother who survives the loss of a child.  Nothing.

Make no mistake about it, Gravity is a visual and emotional and glorious depiction of grief, which happens to be set in space.  Truth.