Life was fairly idyllic before 2008. High school sweethearts, we had three beautiful daughters, a comfortable home, even a cabin near a lake. Oh, there were minor bumps in the road. I’d endured some health issues, a detached retina and a total knee replacement among them. Little did I know that we were in basic training for the journey ahead.

It began in July of that year. Shea, our 14-year-old, complained of trouble swallowing liquids. Her voice was different, too; it was softer, fainter, and just a little raspy. I remember teasing her about it. I never imagined the cause. 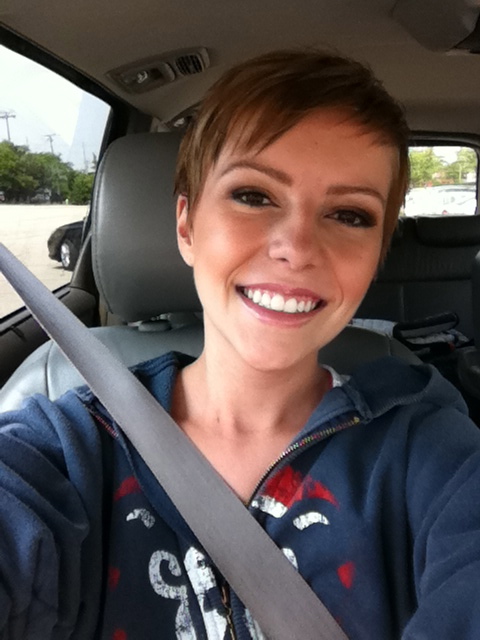 Our pediatrician ruled out strep, mono, the usual suspects, then referred us to an ear-nose-throat specialist. His tests revealed the cause of her troubles: one of her vocal cords was paralyzed. That led to the scan that was to determine the cause of the paralysis. Between appointments, Shea went to band camp, marching and playing clarinet for hours in the August heat. She seemed completely healthy, but…

The phone rang on the last day of band camp. The scan showed a large mass wrapped around her windpipe. Given its size and location, we needed to bring her to the hospital immediately. They feared it could block her breathing and that she could die.

Shea was diagnosed with Hodgkins Lymphoma on August 28, 2008. She never made it to her first day of high school. She spent it at Children’s Memorial Hospital in Chicago, having biopsy surgery.

What followed was nearly four years of intensive treatment. Shea spent days on end in the day hospital, getting chemo. Between treatments, she would bounce back, doing her best to make it to school. Or, she’d spike a fever, and she’d land in the hospital, inpatient. She played clarinet in some halftime shows. She went to the Homecoming dance. She made it through the first chemo regimen, the protocol that puts most Hodgkins patients into remission. But her PET scan still lit up; the mass was smaller, but still active. She began 2009 receiving radiation, her head bolted to the table. She was brave. She returned to school. She joined the badminton team and ended the season third in state. She was named most improved freshman in the band.

The next PET lit up, too; our doctor attributed it to the radiation causing a false positive. In hindsight, now we know that the treatments hadn’t worked. In May of 2009, she complained of itching; soon after, she mentioned night sweats. Both “B” symptoms of HL. Another PET was scheduled, in June; by then, the cancer had metastasized in her lungs, and she was staged 4B.

Many chemo regimens were tried, but it was an experimental treatment, SGN-35, that got her into remission. Her months on that medicine were among her best, with infusions once every three weeks, minimal side effects, and lots of time to get to school, which was her sanctuary, the place where she could just be normal. Meanwhile, she prepared for a stem cell transplant using her own cells. When it finally occurred, she sailed through it, as strong as ever. We had so much hope! We didn’t know that the worst was still ahead… soon after transplant, she relapsed, and her only hope was a stem cell transplant using donor cells.

While a matching donor was sought, we splurged on spring break in Hawaii, and later, Shea attended junior prom; she was radiant. Just a week later, she received the stem cell transplant, using cells from a donor in Germany. We marveled. We hoped.

But Shea contracted mono post-transplant, in July of 2011.

And the mono (caused by the Epstein-Barr virus) morphed into EBV-PTLD (EBV-Post-Transplant Lymphoproliferative Disease). The EBV cells were acting like cancer cells, forming lesions in her body. And for the first time in her journey, Shea didn’t bounce back between treatments. She became more and more sick, in spite of experimental t-cell therapy in New York City, where she and her dad lived for several months. She lost weight. Her throat was damaged by the EBV, and she couldn’t eat. She got a feeding tube and we learned how to prepare and clean and administer the thin gruel that kept her alive. She became so weak that she couldn’t walk more than a few steps. The painful neuropathy in her hands and feet kept her restricted to her comfy chair, unable to draw, or write, or play guitar or video games… her favorite pastimes. The t-cell therapy wasn’t working. She came home for good.

Shea died early the morning of July 25, 2012, in her sleep, in a hospital bed in our family room. Her dad and I slept on the couch beside her. Her sisters slept upstairs. It was peaceful; it was so, so painful. It still is.

Cancer stole my child. Rest in peace, Shea. She was 18.

Shea was Donna’s last hospital roommate at Children’s Memorial Hospital, in July 2009.  We were so very fond of her.