Will was 16 when he was diagnosed with Acute Lymphoblastic Leukemia in June of 2009. It was the day of our 20th wedding anniversary. John and I were headed out to dinner when the pediatrician called. I thought Will had mono, but the doctor knew immediately from the blood work that he had leukemia and we needed to head down to Children’s Memorial Hospital in Chicago. My anniversary card to my husband, that would later be opened at the hospital, read “The last 20 years have been more than I could dream for. I can’t wait to see what the next 20 holds.”

Little did we know what the next 20 hours would hold and how that moment would forever mark all moments in time in our family.

After sitting in the ER for about five hours, they confirmed the leukemia diagnosis before sending us up to what would become our home away from home – the oncology floor. After the doctor left, I held my breath and my tears and asked Will what he was thinking – this athlete, artist, academic, friend loving kid. He said “I’m annoyed.” That’s it…annoyed.

This 3.5 year journey was going to put the brakes on the life of a teenager – socially (hard to be your friend when you don’t know if you can go to the party because you feel crummy all the time and really your priorities are just a bit different than your peers), academically (it’s hard to take AP Physics when you might only show up one day per week but he did it.), emotionally (mood swings due to drugs and just life) and well physically (he would lose 30 lb in the first month, nausea every day, no more hair, neuropathy and the boy who used to run could watch his little brother from a chair on the sidelines)

Annoyed doesn’t quite sum it up for me but that’s who Will was – you see Will loved life and he wasn’t going to let cancer take the core of who he was. It could have all those other things, it could change his reality, but it would not change who he was. 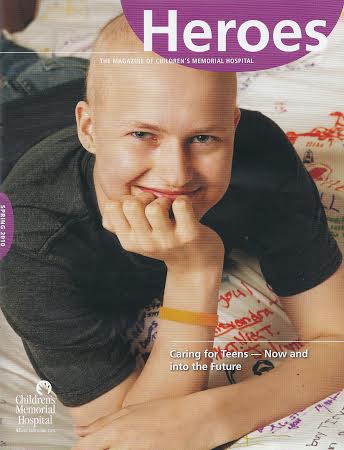 Fast forward ten months of weekly chemo, hospital stays, radiation, nausea, pills and pricks…and yes lots of annoyances! We felt like we had finally made it through the worst. But Will caught a series of infections his body couldn’t fight off and by the end of May we had tried everything and we had to say goodbye. Not exactly the order of things in your parenting – burying your 17 year old son, grieving with your husband and 14, 11, 8 year old children., realizing that the side effects of the very drugs that were saving his life had played into these infections. Annoyed doesn’t quite describe that, if you ask me.

Fast forward five years. Will has been gone four years now. Our oldest daughter is older than Will ever was. She has gone off to college. We are watching our other two boys grow up far too quickly. And yes we still grieve – that’s just how it is. You don’t get over it. You move through it. And you learn how to cope, you learn how to hold onto hope again, you learn how to trust God even deeper. But you still grieve and yes you are still “annoyed.”

You walk by their school pictures in the hall – three change out each year, Will’s is static and starting to look a bit faded. You still struggle and get anxious when meeting new people and they ask “so how many kids do you have?” I know the answer…but will they want to hear it? You still get mail for Will from colleges and credit cards. You still want to wake up and hope it was all a bad dream and have him walk around the corner…but it’s true…your son died.

And so because you belong to that group of ferociously courageous parents whose children have cancer – you do the hard thing and decide to not just be annoyed, but choose to live out your life remembering them well, making a difference for others – riding your bike, raising money and awareness, giving speeches, sitting with other moms who have lost their kids and crying with them because they need to tell the story to someone who gets it and sometimes doing crazy things like annual waterballoon fights with 100+ awesome people from your community because that’s how you want Will remembered – fun loving and generous and a little bit silly.

You see, cancer did not win. He didn’t lose his battle. Will is still a survivor in my book. His life has far outlived his 17 years. Cancer didn’t define it. His story’s just not over yet this side of heaven. But this “annoyance” in Will’s life has changed all of ours and then some. Grateful for the lives of all four of my kids and praying for a day when I sit with my grandkids telling them about “Uncle Will” and hopefully them not knowing what cancer is because it’s just not an annoyance for anyone anymore!

If you would like to support Will’s family in a bike ride for the Leukemia and Lymphoma Society – Team in Training, please join them by riding the Blood Sweat and Tears Ride in Highland Park, Illinois on Sept 28th, 2014, praying for them, or donating by going HERE to help them make a difference for other children with cancer and remember their son Will.

More of Will’s Story can be found at his CaringBridge site HERE.