“Sometimes being a brother is better than being a superhero. “- Marc Brown.

For our family,, my daughter’s superhero is her brother.

Our daughter, Brynlee was born January 20, 2011.   She was our little miracle. It had taken me two years to get pregnant. I can honestly say I didn’t take a second for granted with her. I was fortunate enough to  be able to take off from work her first year of life. I was there for every first moment — first smile, rolling over, first laugh, first crawl, first food, etc.   I dreamed of all the things we would do together as mother and daughter when Brynlee got older; manicures and pedicures, prom dress shopping, wedding dress shopping, becoming a grandma. I didn’t think I would be able to have anymore children, but to my astonishment, eight months later I was pregnant with another little miracle, our son, Ryan.

Then, on August 26, 2013 our nearly perfect life was shattered.  We brought Brynlee to our pediatrician because her eyelids had been swollen and she was sweating at night. Her doctor did bloodwork and 10:30 that night we received a phone call no parent should ever get. We were told to bring Brynlee to the hospital immediately. Her bloodwork was abnormal and it could be leukemia.

I went into shock. It had to be a mistake. Not my baby girl. I remember my husband carrying Brynlee to the car. Tears streaming down my face as I followed, thinking not my beautiful baby girl. I sat in the back of the car with her as my husband drove. I held her hand and stroked her face and hair while singing her back to sleep.  I prayed to God to make it be a mistake.

That night our baby’s innocence was taken away. She was poked more times than I could count as they tried to get a vein for more bloodwork and an IV line. After being in the ER for about three hours, a doctor came into our room to confirm our biggest nightmare, “Your daughter has cancer, but the good news is…” – yes, she said there was good news, “…if she was to get cancer this is the one you want her to get. This was the good kind.  She has the most common and most curable form of leukemia, an 80% cure rate.”

Let me tell you right now, there is NO cancer you want your child to get and there is NO “good” cancer.

We were admitted that night. My dreams of Brynlee’s future fell to the wayside as she began the fight of her life. About two weeks later Brynlee was discharged from the hospital and we were reunited with Ryan. He was so excited to see all of us again. Around that time we also learned that Brynlee had some rare chromosome issue that could cause her leukemia to be resistant to chemo.

On day 29 of treament, every leukemia patient gets a bone marrow biopsy. It is part of the protocol. 95% of children go into remission the first month of treatment and then continue chemotherapy for approximately another 2-3 years.  Unfortunately, Brynlee didn’t go into remission. She failed the induction phase. We couldn’t believe our daughter failed a test.  We joked around that this is the only test she is ever allowed to fail in her life and it better not happen again, but in my mind, all I kept thinking about is what the doctor said the first night. That this was the “good” cancer and now we were receiving more bad news.

Because Brynlee didn’t reach remission she went from high risk to very high risk and would need a bone marrow transplant, but she would need to reach remission first. I couldn’t believe only a month into this and our baby was going to need a transplant. We began the process of looking for a donor. Myself, my husband, and Ryan were all tested.

A few weeks later, the nurse practitioner told us the good news that Ryan was a match. There is a 25% chance of a sibling being a match. Tears of joy streamed down my face. Finally, some good news.  It was better than good, it was amazing. There was a reason God sent Ryan 17 months after Brynlee and we had even saved his cord blood, which the doctors said we would use to spare Ryan surgery. Now all we needed was Brynlee to get into remission.

The next month, Brynlee still wasn’t there. By the fourth month, we were told that we had done all the standard chemo and if she didn’t reach remission our options were running out. Can you believe it? Only four months into treatment and we were running  out of options. Four months of getting bad news when this was the “good” cancer. Brynlee’s second chance at life was right there, waiting for her, yet if she didn’t get into remission we couldn’t do the transplant.

Thankfully, five days before Brynlee’s third birthday we received the news that Brynlee was in remission. I dropped to the floor with such relief and just cried. Our son was going to give our daughter a second chance at life.

On March 20, 2014, Brynlee received Ryan’s cord blood, but the doctors weren’t confident it had enough cells, so the next day Ryan went to surgery where the doctors took bone marrow directly from his hip area. About three hours later he was walking all over the hospital as if nothing happened.

Today, we are 6 months post transplant. Brynlee is doing very well and we are adjusting to our new “normal.” Brynlee and Ryan will always have a special bond. Neither one of them comprehend how special their bond is, but when they grow up, they will. Ryan has accomplished more in his two years of life than most accomplish in their whole lives. 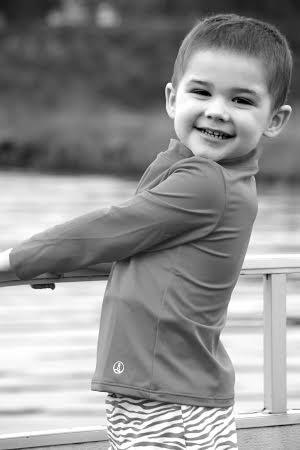 He will always be our superhero! 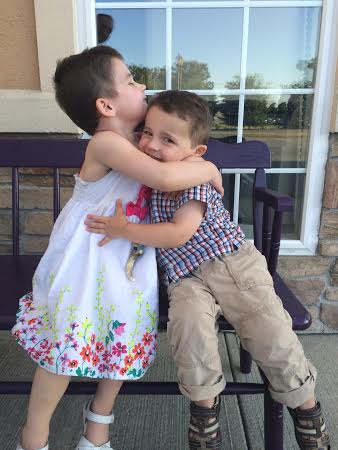 And from me, a note of extreme gratitude as we wrap up this 2014 September Series.  Those of us in the childhood cancer community know it is not easy to witness our pain, sadness, and devastation, and we are grateful that hand in hand with those things you also see our hope, our wishes, our efforts to fund research specific to childhood cancer.

If you were moved by these stories, please consider matching the awareness you have now gained with some tangible action.  There are many national and local organizations dedicated to funding research to better understand and treat childhood cancer.  Our family supports the efforts of St. Baldrick’s, the number one funder of pediatric cancer research in America.  On March 28, 2015, we will host our 4th annual shave event in Chicago.  I will post a link as soon as it is live for folks to register to shave or volunteer.

Other organizations whose work we support is Alex’s Lemonade Stand and Cookies for Kids’ Cancer.

Thank you, as I say, from the bottom of my broken heart, thank you.