My husband and I just celebrated our 14th wedding anniversary.  The ‘ivory anniversary’ it’s called, though, in the large numbers of slain elephants being killed for their tusks, the traditional gift has been changed to “animals.”  Yeah, um, no, we are not exchanging animals to celebrate fourteen years together.

A few weeks after we got married way back in May 2001, months before the world changed on 9/11, when we were all a little more innocent, I realized that with the wedding and honeymoon over, there my husband and I were, well, just married and stuff.  Our days were hitting routine again with the planning and joy of the wedding over.

I was grateful for that, but also aware that the intense feelings and support and just overall sense of living in a space surrounded by seemingly limitless love for this person you’ve chosen to walk next to for eternity (always the optimist) was falling into memory and replacing it were the mundane tasks of life.  Soon, we knew, well, soonish, would be children and a mortgage and all those other things that conspire against the romance of a wedding day.

But then, almost immediately, I realized that we got married for life.  It’s not about the day you marry — the party and the dress and the dancing — but the life you create together.  The wedding vows that were written independently, to be heard for the first time as we spoke them to one another, reflected that knowledge.  I wanted those vows to be part of our marriage, not just part of our wedding day.

I made two copies, one for each of us, and gave them to my husband with some timidity.  I hoped he would not think me an insufferable sentimentalist (though I am).  I read them aloud again then put them in my wallet sleeve, tucked just behind a photo of my parents taken on vacation at the Smokey Mountains in 1963.

Fourteen years later, I am grateful I did that. And, as I hoped, I do look at them.  Not every day, mind you, but a few times a year.  When I am feeling low and need a reminder.  When I am feeling distant from my husband.  When I am feeling like the Universe is working against me and I need confirmation it is not.  When we are knee deep in diapers and math worksheets and bills.  When I start to spend a wee bit too much time daydreaming about being alone on a beach with not a soul around me.

I read those vows and I feel better.  They transport me to May 19, 2001, a gorgeous spring day chock full of everyone I loved most in the world, standing next to the man I now got to call “husband.”  That day was lousy with love.  I was drenched in it.  We were both young and pretty and head over heels and full of hope. 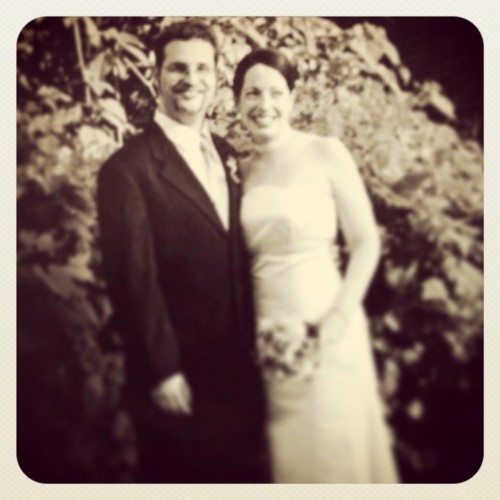 That hope and love and intensity and wanting to never forget any of it is why I laminated our vows. I wanted to keep those words and that hope close.  So far, it seems to be working.