January 2nd, 2006 started out like any other normal day.  I was doing Karma’s hair and playing with her in the living room.  She got up to walk away from me and I noticed that her right leg was bigger than her left leg, right above her knee.  I asked her “Karma what did you do to your leg?”  She had no idea what I was talking about.  I grabbed her leg and started to examine it more carefully.  What I was looking at wasn’t discolored, it wasn’t a bug bite, and it wasn’t swollen.  It was hard as a rock and the whole thing moved when I grabbed it.

I called my dad and told him that Karma had ‘this thing’ on her leg and it was big and I was taking her to the hospital.  We got to the hospital and sat in the ER for what seemed like forever.  Finally, after five hours, they took Karma in and examined her leg.  The staff then told me that they couldn’t do any further testing without a doctors prescription.

The following day I managed to get in touch with her doctor and get the required papers.  We went through two MRI’s, four different doctors, and ended up in Gainesville by the 6th.  The doctor immediately scheduled a biopsy.  On Wednesday, January 11th, we received the worst news possible…  My baby had cancer.

It was a softball sized tumor in the back of her right thigh right, above the knee.  The tumor had metastasized into her lungs before she was diagnosed.  She was only five years old.   We had no idea what we were getting into.    Over the course of the next 26 months, Karma endured 23 months of chemo (only stopped for two months in 2007), five lung surgeries, including the total removal of her left lung, one leg surgery to remove the tumor, and the surgery to insert her port. 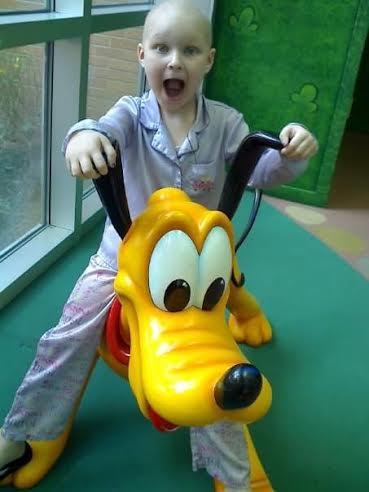 Never once did Karma complain about pain or the effects of the chemo.  She was such a strong person and had the faith to move mountains.  In July 2007 we were able to go with her to California for her Make-A-Wish trip.  We spent 6 days in San Diego enjoying the parks.  We went to Legoland, Sea World, The San Diego Zoo, and were able to watch a Padres game.  It was amazing!  There is nothing like seeing that joy in your child’s face.  She learned how to swim while out there in a roof top pool.

On March 1st, 2008,  Karma was the maid of honor at my wedding.   She was so beautiful and so excited for us.  A short sixteen days later, Karma passed away peacefully at home.  It’s so hard to believe that it’s been almost ten years since her diagnosis.  It is a day of my life that I will never forget.

Melinda Martin is married and the mother of three girls, Karma, Jasmine, and Lily.

If you don’t want to miss a single entry in the September Series, consider subscribing to my blog.  Here is how: