This is my mantra every September as soon as I found out that this is indeed an important month to recognize children and the challenges they face struggling with cancer. I share this on my Facebook page, I share this at my work and I share this to the public as I email government officials asking them to make  the above statement in front of other Government members.  I would like other people to proclaim this and not just because they are a parent who received the news, “there is a mass in your daughter’s head and we can’t remove it.”

This is the moment of greatest impact for us, my husband and I. We had many, many, many moments that hit us in the gut. For instance, when Peyton had to get her radiation mask made.  What a difference there is between a children’s hospital and an adult cancer institute.

At the children’s hospital, she received some lovely sleepy gas for her first ever sedation.  At the adult cancer institute they don’t house the gas for children. They poke a 4 yr old child repeatedly (who is screaming and crying) until they find her tiny vein. Then tell me, “Good job, Mom!” Then Mom has to walk into a waiting room where Dad is white hot mad because he could hear our little daughter screaming and crying and he was helpless.

That’s the story I am going to share with you. The first moment we felt completely helpless and hopeless.

In May 2010 I had noticed a slight eye turn in Peyton. It wasn’t something I could just ignore, so I booked an appointment with an eye doctor. Initially the optometrist said she would just need glasses for a far sighted condition. I just needed to bring her back in a week to be fitted for glasses.

One week later there is a head tilt as well as the eye turn. The optometrist books an appointment for us to see an ophthalmologist in just under three months, stating that she thinks there may be a greater need to have the eye turn examined. That it’s a pretty normal occurrence and easily fixable. The tilt? Well that’s just Peyton compensating for the eye turn. 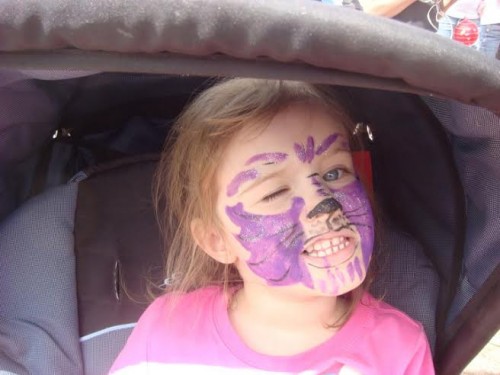 August 4, 2010. By now the eye turn and head tilt remained and now Peyton started to have a slight facial droop. We didn’t notice it at the time but as we look at the Canada Day picture above, it is clearly there. We spent hours in the waiting room of the ophthalmologist and when he did see Peyton he was quick to notice the head tilt and the facial droop. His best guess was that she had palsy of the 7th or 8th nerve in her brain. He called down to the connecting children’s hospital and told the doctors that our daughter needed to be seen NOW. We even had a security escort through the winding corridors to the emergency room of our children’s hospital.

When family arrived to provide some support, my husband and I went out into the parking lot and I broke down and cried. I was terrified that she might have to have her brain cut in to. Why did this happen? I wept. I worried. What I would give today for it to be just a palsy of the 7th or 8th nerve.

A couple  of days later, we are brought in for Peyton’s MRI and she is kindly and gently put under with gas before being poked and sedated. When she woke we were in for an incredibly huge surprise. We hear screaming, we hear yelling. I am brought into the recovery area to a manic child. ‘This is not my daughter,’ I think to myself, ‘What has happened?! Why is she like this?’

Peyton is beside herself and she cannot be calmed no matter what motherly technique I try. I feel absolutely helpless. Little did I know at that moment that that was a small taste of what “helpless” actually is.  A nurse and I strap her into a stroller for safe transport up to her room.  We are literally walking like we are training for the speed walkers championship for the elevator.  A doctor in scrubs comes running alongside us. My husband looks at her and demands to know why our child is acting this way. We are told right there, in a corridor of the hospital, steps away from an elevator that will whisk us off to a place where I can hold my child and comfort her….”there is a mass in her brain. It swelled up during the MRI and this is what is causing her to act in this manner. When we get her upstairs we will give her steroids to relieve the swelling.”

Helpless, definition:  1. unable to help oneself; weak or dependent. 2. without aid or protection. 3. deprived of strength or power; powerless; incapacitated: 4. affording no help.

In that moment we were all of these things.  “There is a mass in her brain.” The next hit came when they actually described to us the type of brain cancer our sweet daughter had. DIPG. She’s is terminal. Helpless. The average survival is 6-8 months.

Helpless is now coupled with the word hopeless.

Hopeless, definition:
1. Having no hope; despairing.
2. Characterized by despair.
3. Having no possibility of being solved or dealt with; impossible.
4. Having no hope or chance of changing or improving

The story could end there. We chose for it not to.

A new word rose up. Hope. The root of that earlier compound word that tries to strip you of your essence, but this word holds more power you see. It holds more power because with it, you gain a power inside you to muster an immeasurable amount of strength that will allow you to live through a myriad of things your four year old child will have to endure and you will be pushed to the sidelines to watch. You will find it in you to cheer and laugh. You need hope because (as stated in a quote I once read), you never know what tomorrow will bring.

So we made many, many memories. We found joy. We welcomed a new sister for Peyton. We endured because of hope. Peyton beat the average. She had a honeymoon phase for a delightful 12 months before the smallest of changes began to occur again. She remained with us 19 months after diagnosis and left us full of hope even after she left this world March 2, 2012.

My hope is a different kind now. I have many different hopes. I suppose those are what get me out of bed on the hardest days. But it is the strongest and most resilient word in the Cancer world.

If you don’t want to miss a single entry in the September Series, consider subscribing to my blog.  Here is how: Type your email address in the box and click the “create subscription” button. My list is completely spam free, and you can opt out at any time.