Poor Caillou.  Seriously.  Poor little bald headed animated child.  People hate him the world over. Not dislike him, or feel mildly irritated by him, or, you know, turn the channel when he comes on the TV dislike him, but hate him, loathe him, and wish very, very bad things upon him.  Him being a fictional character.

The level of animosity reserved for this little guy astounds me.  You would think that a fictional four year old would push a few buttons, what with the whining that goes along with being four, but man, it would be easy to confuse him with, I don’t know, Hitler or ISIS, for all the hate and venom he incites in parenting circles.

Here is a sample from Urban Dictionary under Caillou:

A fucked up kid’s show about a spoiled little turd who gets upset when he doesn’t get his way.  If Caillou was real, I’d kill him.

Caillou is a soiled little shit TV show on PBS. Caillou can’t grow hair, not because he has cancer or progeria, but because he sucks, and even his own body recognizes that he does not deserve hair or food or love

A children’s show featuring an aggressive bald kid who is easily irritated and agitated when things don’t go his way.  Caillou made me search for my virginity.

Then there was the anti-Caillou smackdown Buzzfeed ran last week.  Um.  Okay.  Well. It seems more than a few folks take their PBS really, really seriously. In other circles I have seen Caillou referred to as a prick, douchebag, cocksucker, asshole, uterus killer, fucker, and the list goes on and on and on with some decidedly unfriendly language not typically associated with kid’s TV.

If the point is that Caillou acts like a typical four year old, well, then, sure, I totally agree.  Most four year olds (at least the two I have parented to date; I still have a two year old in the pipeline) can be whiny and entitled at times.  It’s just part of the package.

Full disclosure, if you haven’t already noticed, I kind of dig the little guy.  I first started watching him in 2007.  Eight years and two toddlers later, I’m still watching. So are my kids.  Our brains aren’t bleeding.  I haven’t gone insane from the whining.  My kids don’t seem to have experienced any adverse effects of too much Caillou.

And laying all my Caillou cards out on the table, I actually like the show, especially compared to some of the other offerings in the kids’ entertainment arena.  Here’s why:

1. Caillou gets to have emotions.  Yes, he is whiny and entitled at times, but he also experiences guilt, regret, anticipation, joy, fear, curiosity, annoyance, gratitude, frustration, confidence, impatience, relief, and boredom.  I complied this list after watching just one 30 minutes episode.  Even better, the grandmother narrator — a kind, nurturing voice, labels Caillou’s feelings for those watching at home, e.g., “Caillou was upset his little sister took his favorite toy.”  Of course he was!  But then we get to watch him figure it out, too.

2.  I recognize the day-to-day family environment.  There is a loving mom and dad with grandparents close by.  You see the family doing chores around the house, and the grumbling that goes along with that.  The adults cook, clean, shovel, rake, grocery shop.  The adults get to complain, too, because, yes, it is a pain sometimes to be responsible, especially when your car breaks down.  The family eats together and celebrates together.  The show reflects my kids’ day-to-day and I get that might not speak to everyone, but it is a comfort to see your small world reflected on the screen.

3.  It’s quiet and simple.  There is a whole lot to mine from a kid’s simple experiences, a lot to learn from and consider.  When I think of shows like Wow! Wow! Wubbzy!, Sheriff Callie’s Wild West, or even the beloved Thomas or Dinosaur Train shows, basic lessons in social skills are encouraged through the use of robots, trains, dinosaurs, or animals. Caillou does all that through people.

Why is it more appealing to teach things like patience and sharing by adding an extra layer of difference?  Is it more palatable to learn about grumpiness or bullying from a train than from a kid who might act a lot like your own?

4.  Imagination is encouraged. In later episodes (admittedly, these are not my favorites), Caillou uses his imagination to explore being an astronaut or a rock star. Some of this is accomplished through reading books found in the library his Mom and Dad take him to — win win!

5.  The show features discipline.  This is one of my favorite aspects of watching Caillou with my little ones.  When Caillou acts like a jerk, there are consequences. When he grabs a toy away from his little sister or excludes a classmate on the playground, there is a price to pay for his poor behavior.  He can stomp his feet and not like the consequence, but they are still there.

As a parent, I love that.  And I honestly think it is productive and useful to see that 1) all kids misbehave sometimes; 2) there are ramifications to misbehavior; and 3) your parents are not the only ones who practice standards of behavior, discipline, and consequences.  Those are things other kids have to deal with, too.

Perhaps this post presents me as a Pollyanna.  Well, then, so be it.  I will own that shit. I’ve just seen the words “Caillou” and “cocksucker” attached one too many times for my liking.  And rather than tell all you Caillou haters to get a freaking grip, or, do as my husband joking encouraged, and theorize that anyone who hates Caillou really just hates their own kids, I will simply encourage you all to give it another look see, that Caillou show, and try and be just a teensy bit more objective towards him.

Honestly, he’s not all that bad.  And, more importantly, he probably resembles your own kiddos more than you realize. 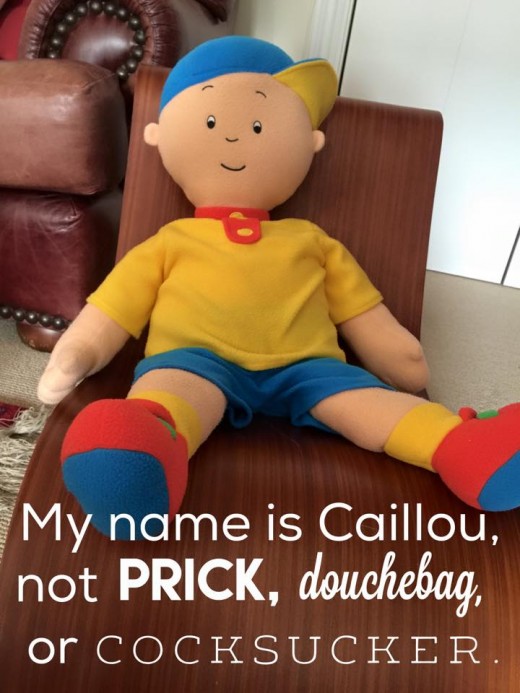