I see you, in your sport coats and ties.  You look so handsome.  Your parents must be proud of you.  I am a mom to two boys just like you.  My older one loves to wear a coat and tie, too.   Just this morning I sent him off to school in his finest clothing for picture day.  I wanted him to wear his navy sport coat and polka dot tie, but he chose gray.  Boys don’t always listen to their mamas, do they? 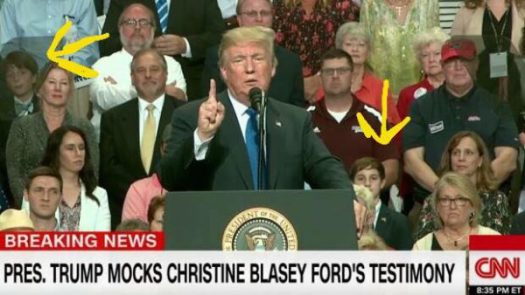 But that’s neither here nor there.  Full disclosure, I am worried for you.  You got a front row seat last night to the Divided States of America under President Trump.  I don’t care what your politics are, red or blue, Republican or Democrat, it is not a good place to be.

I am sorry for that.

We adults don’t always get things right.  We make mistakes.  Often.  These days too many of us are making too many of them and the stakes are getting higher and higher.

What you witnessed last night was one of them.  Regardless of you or your folks being Trump supporters, you should not see the President of the United States of America mocking and making fun of a woman who has claimed to be the victim of a sexual assault.  She is not evil.  Democrats are not evil.  They are your fellow Americans.  They are your teachers and your doctors and your police officers and your soldiers that protect you.

I’ve been interested in politics since I was younger than you are now.  One of my very first memories was watching former President Nixon resign his office.  I remember my folks being glued to the TV for a few days.  In the 4th grade, I got to go to our local high school and see President Carter give a speech.  I remember feeling full of awe when the Secret Service went through my backpack.  Did they do the same to you last night?

President Carter did things a wee bit differently than President Trump.  He held a town hall type of meeting where average Americans, my neighbors, were allowed to ask questions.  I remember the husband of my 3rd grade teacher, Mr. Kast, was sitting near us and he asked a question about traffic lights.  No joke.  Traffic lights being too long was the problem he wanted to address when the President came to town.  It seems like a different world.

I miss those days.

What you saw last night was not normal.  It is not normal for the President of the United States to refer to roughly half of voting Americans as evil.  I know being a kid, you’ve only lived under two presidents, so you’re batting .500 here with presidents that do this, but please, trust me when I say this level of anger and hate and vitriol (look up that word on the Google — it’s a good one and will impress your teachers) is not normal.  It’s not healthy for our democracy either.

Some folks might think that you’re too young to be political or have political opinions that mirror or oppose those of your parents.  I disagree.  From my own childhood, I know better.  It is very possible for kids to think about these things.  I encourage it.  Be more political!  Read!  Ask questions!  Look for folks to talk with that both agree and disagree with you.  Question everything you read and are told.  You’re never too young to form your own opinions.  Look at those kids from Parkland.  They are changing the world.

But listen closely and hear this:  People who disagree with your political opinions are not inherently (another word to check on Google) evil or your enemy.  Women who have come forward with allegations of a sexual assault are not people you should mock or belittle.  Ever.  Under any circumstances.  Disagree with them.  Use healthy skepticism, sure, always, but never demean or belittle.

There are lines that President Trump not only crosses, but destroys.  Some things are sacred, or should be.  Basic common decency is one of them.  He appears to lack that or think it makes him stronger or more powerful to abuse human decency.  It does not.  Know this.  All those adults cheering him on last night?  That was also not okay.  Or decent.  Or kind.  Or compassionate.

I am sorry to put you in this position.  It isn’t really fair.  But that is where we are at in the Divided States of America in 2018.  It shouldn’t be this way, but it is.  For your sake, and the sake of my sons and all the kids of America, I hope we get it together quickly.  I worry for us.  All of us.

Adults are supposed to protect children, the younger generation.  We are not doing that right now.  Probably there are a lot of folks out there who think me speaking to you so frankly is a bad thing.  They want to protect you, no doubt.  I will take that risk because looking at you, I didn’t just see two handsome boys in their coat and ties.  I saw your discomfort, your dis-ease.  Those are the things that give me hope these days.

Trust in that, not in what you saw last night.