This is the eighteenth of thirty-one installments of Donna’s Cancer Story, which will appear daily in serial format through the month of September to recognize Childhood Cancer Awareness Month.  Each post will cover one month of Donna’s thirty-one months of treatment.

Donna had her first post-surgical scan this month and it was clean.  Because of the IntraBeam radiation, the study required MRI scans every six weeks for six months after the procedure, so “scanxiety,” as Cancer Parents call it, would be early and often.  But still, we felt lucky.  I remember willing myself to embrace the fear of scans, as having them meant that Donna was still in the game.

We used to call them “pictures inside your body” as a way of normalizing them for Donna’s little two and three year old self.  When the results were good, like this month’s, we would tell Donna she took “beautiful pictures inside her body.”  When the results were bad, I honestly can’t remember what we told her.  I think we simply didn’t discuss it with her.  Now I am left to wonder just how much she understood.

On scan day we would negotiate for the earliest slot possible.  7 or 8 a.m. was ideal.  Because she went under anesthetia for these tests, there was to be no food before.  Early scans were less hassle; afternoon scans were the worst, as you knew you would be bumped for emergencies.  More than once we were at the hospital past 10pm finishing up.  This after not eating all day and having had anesthetia.  When Donna woke we were ready with milk and pancakes.  She would devour them.

Twice, Donna experienced what they call “rage reaction” from the anesthetia.  She would wake, as described, in a rage — thrashing, screaming, inconsolable.  Once we had to swaddle her in a hospital blanket and lie on top of her for her own safety.  Terrible.  She would slowly come out of it after about an hour.  Some children experience those very frequently and there seems to be no rhyme or reason to who gets them and when.  Sigh.

I still continued to work during these months.  My boss, who knew my situation, took a gamble and hired me anyway.  Just a few weeks after I had started, Donna relapsed, requiring me to take some time right away.  Because I worked part-time, there was some flexibility, so I was lucky.  My poor boss.  When I interviewed, just two months earlier, Donna was doing great and she had no idea I was pregnant.  It was before twelve weeks and out of fear of miscarriage I did not want to jinx anything by letting the cat out of the bag.  That was a good boss.

Everything seemed to be moving forward, so when a neighbor suggested Donna might like to take a dance class, I asked her.  Honestly, it had never occurred to me.  Some Mom, huh?  Donna loved the idea.  She was so excited to wear a tutu and ballet shoes and loved the sounds that came from her tap shoes on our wood floors.  I had only taken ballet through the park district, so the idea of a three year old prepping for a recital with costume and choreographed routine seemed . . . unnecessary?  Silly?  It was a bit too Toddlers & Tiara for my taste.

I was wrong.  Parents, run with your toddlers, boys and girls, to the nearest dance studio.  It is a wonderful opportunity to have them socialize, learn respect, coordination, and appreciation for their bodies.  Getting Donna into dance was one of the ways we chose hope, the mantra that had guided our Cancer Parenting since diagnosis.  Choosing hope meant believing that Donna would enjoy her classes, make it to the recital, shine on a stage like the star she was, and live.

Choosing hope is one thing, but finances are another.  The studio allowed different payment options:  full year, by the semester, or month-to-month.  As hopeful as I was, I made the decision to pay month-to-month.  This made me very sad, but it was our reality.  As much as I embraced the idea of Donna being cancer free, I was a realist and hated the idea of wasting money.

There are certain things moms and daughters do, things I had dreamed about since Donna was first gently placed in my arms, still warm from my belly.  Reading Laura Ingalls Wilder’s Little House books was one of them, braiding her hair was another, and shopping for girl’s clothes was in there, too.  I know it’s shallow, but sometimes I’m shallow. 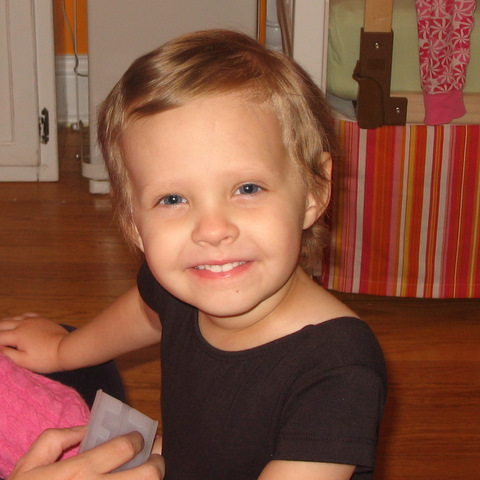 Donna and I went to a local boutique that caters to serious dancers and kids with moms, like me, who like a shopping experience.  Donna chose a black leotard, black tutu, black tights, and black ballet slippers.  Donna, you see, liked black.  It was her favorite color.  Donna was cooler at three years old than I will ever be.  Word.  We went for the black tutu and leotard, but opted for the more standard pink tights and slippers.  She was such a great kid.

The first day of class I knew the teacher was something special.  Somehow, within minutes, she had a room full of 3-5 year old girls listening, moving in order, and participating as a group.  Wow.  That is a feat.  Donna was intently watching and working to move her body as the teacher did.  In our first glimpse of her as a student, as a dancer, we welled with pride and love.  She was amazing.  Some of the other parents watched, and some read, and some noodled with their phones.  Mary Tyler Dad and I were riveted on the rockstar in black, the sprite who was smaller than most others by a full head.  Donna was beautiful.  I wonder if any other parents wondered about her small stature or funky haircut.  Most seemed not to notice, or were too polite to ask.

There were some tears, but not from Donna.  Until the end.  The teacher organized something I called, “community movement.”  As soon as I realized what was happening, I knew it would not be pretty.  I could see Donna’s expression change through the mirrored glass.  First fear, then discomfort, then the tears and the plaintive wails of, “Mama!”  I jumped up, knowing the moving while touching was too much for her – – she could not run or jump like the other little girls.  Cancer had never allowed her to gain those skills and she simply couldn’t keep up with the others.

We talked about it later and she described feeling “pushed.”  Donna calmly explained this to her teacher the next week at the start of class and we went from there.  I love that despite this episode, she went right back in and did it again.  I love that she could articulate it in her own words, what this experience felt like to her, how scary it was.  I love that her teachers could not have been more accepting and supportive.  I hate that Donna could not jump or run or skip.  I hate that one of the other students noticed this and seemed annoyed by it, repeatedly bossing Miss D. around, telling her how to jump.  I hate cancer.

Donna was wiser than me.  I worried she would be asked to leave the class.  I suggested that Donna could just not participate in that part of class.  No.  Donna knew to talk with the teacher, the teacher knew to place Donna at the end of the choo-choo line, and all was well the next week.

Later that day, after Donna’s first class, I ran into a friend who was with her daughter, just six months younger than Donna.  I wept in the Old Navy and my friend comforted me.  It was so hard to see Donna with other children and not be able to deny what cancer had cost her.  I was away from her and I let myself feel and grieve.  Then I went home.

This last shot was Donna’s first haircut.  She loved the police car she sat in and took this haircut very seriously.  The stylist’s mom had just been through chemo and she took good care of Donna.