This is the nineteenth of thirty-one installments of Donna’s Cancer Story, which will appear daily in serial format through the month of September to recognize Childhood Cancer Awareness Month.  Each post will cover one month of Donna’s thirty-one months of treatment.

Donna had another set of scans this month that showed  her tumor was back.  Another relapse.  Tears and terror for us, dancing and pumpkins for Donna.  Today’s update is hard to write.  We were so hopeful, so needing a break from cancer, so exhausted.  I get so angry at cancer sometimes, it’s randomness and brutality, it’s tenacity, it’s mystery.  I rarely asked this question when Donna was in the midst of treatment, but I do ask it sometimes now:  Why Donna?  Where did it come from?

We have no idea, nor will we ever. 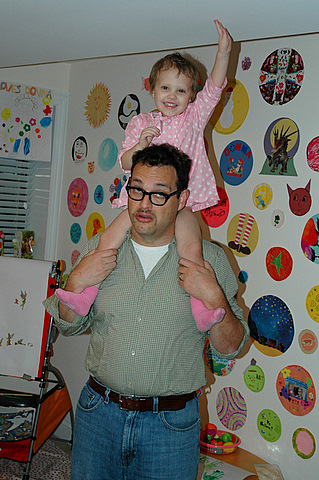 There is a total disconnect today between the photos you see and the words you read.  How to reconcile the girl in our photos, our beautiful Donna, with the photos the doctors order, those inside her body?  How, as a parent, do you make sense of what you see in front of you and what the doctors tell you is happening?  I spent so much time wishing and hoping that one day someone would call from Children’s and say, “We are so terribly, very sorry, but we made a mistake.  Your daughter is fine.  Our bad.”

This photo was taken at the baptism of Donna’s cousin.  It was a beautiful day, a celebration for her third cousin born within six weeks of one another.  The minister baptized a few babies that day and spoke of children and of hope.  He talked about how children are never really ours, that as parents, we are here to steward our children through their early life, but must embrace that they are not ours.  I wept silently as he spoke.  Afterwards, we all went to the Brauhaus on Lincoln for beer, brats, and dancing.  Donna loved the music and Mary Tyler Dad and I were feeling so grateful.  Sigh.  It was such a lovely day. 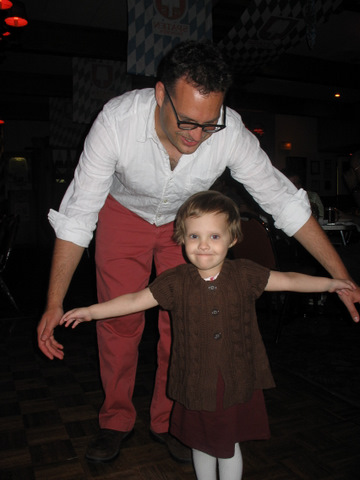 After the news of relapse, there is the business of staging.  Yet again, another series of tests, scans, punctures to determine if the beast had metasticized.  More hospital time, more anesthetia, more terrifying hours spent waiting for the phone to ring, knowing in our bones that the news will be bad.  Our bones did not deceive us.  Two small spots on Donna’s spine, an area the cancer had never been before.  Our oncologist sounded disheartened, something you never want to detect in the voice of your daughter’s oncologist.

Donna’s neurosurgeon was reluctant to operate both because of the location of the tumor (same place, though growing in a different direction, too close to vital blood flow paths) and her stated belief, “There is not a surgical solution to this tumor.”  Coming off July’s relapse, just three month’s prior, we were living so large, truly believing Donna had dodged a bullet.  We had had a taste of normalcy and now it would be gone again.  The treatment decision was chemo, though which protocol was still uncertain.  The sledgehammer of chemos had only stalled Donna’s cancer, not stopped it, and in that process had caused damage to her kidneys.  What else was left to try?  At the end of this month, we were still waiting for that answer.

And through this, Donna was in another course of PT.  Seeing her dance and some of her physical limitations, Donna could not run or jump, I had asked for a booster of PT to increase the strength she did have.  Donna loved her therapists at RIC and they her.  The therapy was welcome as it provided structure to our days, indoor fun, and always gave Donna challenge and confidence.  Here she is working on balance as she throws frogs into a bucket I held.  I was so proud of her.

Donna was as she had always been during this month:  a joy.  A beautiful, smart, clever, girl.  We did not share this news with her.  We discussed and explained procedures with her, worked hard so that she would feel aware, secure and prepared for whatever cancer would bring her that day, whether it be a surgery, MRI, a needle stick, or blood transfusion, but never talked big picture with her.  She was three.  I am forever grateful that we were spared the difficult conversations children just a few years older would have needed.  Again, Donna had no fear or context of what cancer meant or did.

This photo was taken just two days after the news of relapse.  I was growing bigger with Mary Tyler Son and scared out of my mind for both my children.  And there is Donna, looking at me with such tender love and affection.  She is unfazed by her cancer.  She is happy, she is loved, she is secure.  Cancer could ravage her brain and body, but it could not ravage the love between us.  It could not touch our love. 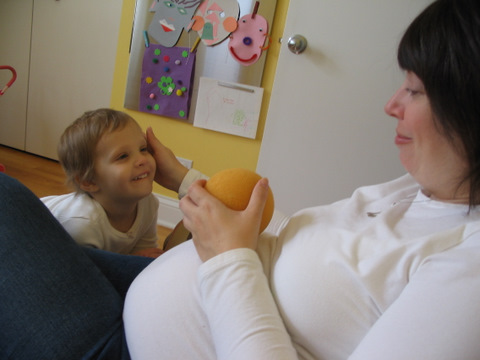