This is the fourth of thirty-one installments of Donna’s Cancer Story, which will appear daily in serial format through the month of September to recognize Childhood Cancer Awareness Month.  Each post will cover one month of Donna’s thirty-one months of cancer treatment.

It’s hard to believe, but yesterday’s entry only covered two weeks of the third month of treatment.  There was simply too much happening to document it all, which is a bit like this month, too.  Donna’s cancer, to use an analogy, was very much like the stock market.  The ups and downs are exhausting.  The best strategy is simply to focus on what is happening right in the moment you are in and deal with the future as it comes.  If it comes.

Chemo was hard on Donna.  I mean, she was a tiny girl, under 25 pounds.  The regimen that was selected was known as “ICE.”  It required five inpatient hospital days to administer, including time for pre-hydration and post-hydration to help flush the toxins out of her system.  An oncologist acquaintance referred to it as the “sledgehammer” of chemo cocktails.

The first month was terrifying for us.  We did what we needed to do and were grateful for the opportunity; grateful for the ability to inject poison into our girl’s thin, tiny veins, if that is what it took to rid her of cancer.   Triple sigh.  At our first discharge we got a home health order.  A nurse would be coming and supplies would be sent so that we could manage Donna’s IV and medicine needs in the comfort of home.  That adds stress to an already stressful situation, but you buck up and do what needs doing.  That is the life of a Cancer Parent.

With the first round of chemo there was vomiting, loss of appetite, lethargy, and the thinning of the hair.  Donna’s beautiful curls were going away.  It’s such a vain thing, but ask any Cancer Mom and she will tell you – – this hurts like hell.  Donna slogged through it, finding comfort in our arms and the distraction of tee vee and youtube.  Our parenting standards went away with Donna’s hair.  If potato chips, tee vee and staying up late brought her comfort, so be it, we would work through the consequences later.

We returned home, grappled with the King of Sucky Home Health Agencies, and did the best we could to comfort Donna and tend to her needs.  This was heartbreakingly difficult as there was a battle going on within her body between chemo and her cells, both healthy and unhealthy, that brings almost constant discomfort to cancer patients.  Nothing was good enough.  Food, books, videos, tee vee shows.  All were met with the plaintive wail of Donna yelling, “SOMETHING ELSE!”

But we got through it.  Amidst the discomfort Donna developed neutropenia, the phase of treatment where your immune system collapses, making you vulnerable to opportunistic bugs.  Infections can kill.  We went back into the hospital after a long and tedious ER stay and were brought to our room on the oncology unit.  I immediately walked to the nurses desk and said, “I think there’s been a mistake.  Donna is neutropenic and needs an isolation room.”  God bless her, the nurse patiently educated me that most of the kids on the floor were neutropenic.  If she rolled her eyes, it was only after I walked away.  The single room we enjoyed during the chemo infusion was simply good luck.

Miraculously, Donna recovered over a couple of days and returned to good health.  No infection developed, but she received days of IV antibiotics until our docs were satisfied of that.  We went home to pack.  That’s right, pack.  Thinking there was not enough going on in our lives, we had bought a new home.  What the what?  Yep, just days before Donna’s diagnosis we had put a bid on a new place not a mile from our old place.  We were given the opportunity to back out when the developer learned of Donna’s cancer, but we opted to move forward.  It seemed a hopeful choice to us and one Donna fully endorsed.

I just shake my when when I remember the insanity of this month.  A few bags were packed to stay at a friend’s home while they vacationed.  A boat load of believers had a packing party for us and knocked it out over a day and a half.  Movers came and when we returned to our home, it was a new home, just half a block away from Donna’s favorite park.  We had been unpacked by another crew of volunteers.  Donna loved it, we all did.  I would spend the next several months finding things others had unpacked for me, never forgetting how amazing human beings can be.  Aside from the cancer, who hasn’t fantasized about someone else packing, moving, and unpacking you?  That was one of the gifts cancer brought us.

The plan for Donna was to be rescanned a few weeks after the first chemo to determine if it was having the effect that was hoped for.  Again, no roadmap, just hopes.  The docs were pleased with her recovery – – this was hard to imagine as we saw our girl shrinking and sad and thinning.  They saw a girl who had no infection and a quickly recovered immune system.  Recovery is in the eyes of the beholder.  Our oncologist suggested pushing up the scan dates to capitalize on Donna’s health.  Gulp.

The MRI was performed at 6:30 on July 3rd.  We got home about 11:30 that night, Donna wired and hungry from not eating since early that morning.  The next day was quite possibly the longest day of my life.  Donna played, Mary Tyler Dad kept her company, and I nursed my anxieties with television, chocolate, soda, and pajamas.  Happy 4th of July, folks!  On the fifth, unable to stand it a single second longer, I called our RN.  The CT looked good, but the final read on MRI was not complete.  Given our history with hearing too early interpretations of scan results, they were extra careful.  A couple of hours later we got the call:  Donna’s lung lesions were significantly diminished.  There was a clean spine and the residual brain tumor had remained stable.  RELIEF.  The chemo was working.  Suddenly, we did have a roadmap.  More of the same, possibly 4-6 more months.  Bring it.  We were on top of the world.  Donna was strong and if she could handle it, so could we.

In the midst of this chaos, our friends had organized a benefit in our honor.  They were worried for us about medical expenses and insurance and wanted to do what they could.  This was so very humbling, to be on the receiving end of such generosity, and I fear to this day I will never be able to repay what people did for us in Donna’s name.

A few days after that, Donna turned two.  We celebrated with a platelet transfusion.  Unexpected as it was — we got the call at 2pm — the need was urgent and could not be postponed.  Donna was okay with that.  For her, it was a hospital day with two parents instead of one.  And the docs and nurses gifted her beautifully wrapped presents and sang the happy birthday song.  Our girl was two! 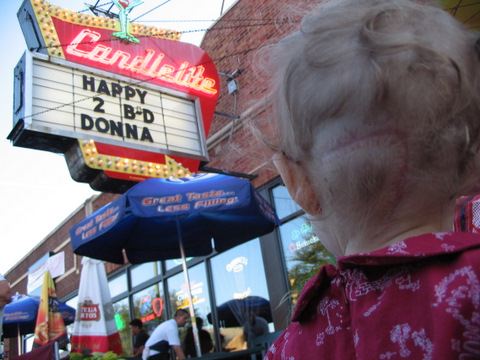